Have Saucer Will Travel 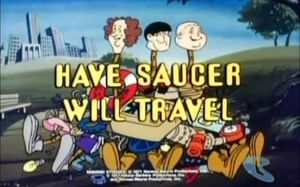 Have Saucer Will Travel is the fourth episode of The Robonic Stooges.

The Blobobians want to invade planet Earth, but first they want to check to see if there's intelligent life on there first.

Meanwhile, in 3 Stooges Junkyard, Larry and Curly are painting their house orange, while Moe watches them from out the window. The two get paint on Moe's face, and he gets angry. Agent 000 calls them about the aliens when they just landed in the junkyard. The Stooges change into their costumes in the ship, and the Blobobians grab them back into the ship.

Community content is available under CC-BY-SA unless otherwise noted.