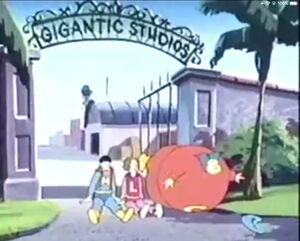 Gigantic Studios is a fictional movie studio that appears in The Robonic Stooges episode, Dimwits and Dinosaurs.

When The Robonic Stooges attempt to travel back to the present day after capturing Ug the Pug and the stolen money, they think that they are still in prehistoric times. But when a film director says “cut!” The Stooges learn that they were on the set of a Gigantic Studios film. The name of the film is unknown.

Retrieved from "https://stooges.fandom.com/wiki/Gigantic_Studios?oldid=9603"
Community content is available under CC-BY-SA unless otherwise noted.