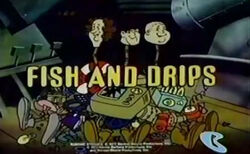 Fish and Drips is the third episode of The Robonic Stooges.

Shark Yo Yo has defrosted a giant octopus, and uses it to rob a ship.

Meanwhile at 3 Stooges Junkyard, Larry lifts a car on his back and Moe instructs Curly to oil the car, but he ends up getting Moe covered in oil. They are then called by Agent 000, and they’re off.

After their multiple failed attempts at defeating Shark Yo Yo and the Octopus, they extend their arms and legs and walk on all fours. The octopus mistakes them for a female octopus and he hugs them. In the end, The Stooges get the octopus tangled with Shark Yo Yo, they end up damaging the ship, and the three of them have to pull the ship themselves.

Retrieved from "https://stooges.fandom.com/wiki/Fish_and_Drips?oldid=9851"
Community content is available under CC-BY-SA unless otherwise noted.