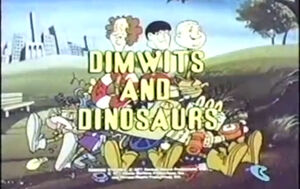 Dimwits and Dinosaurs is the second episode of The Robonic Stooges.

Ug the Pug has stolen Dr. Hansenfoot's time machine, and has robbed the First National Bank. He has used the time machine to travel to the Stone Age, as a hideout where nobody can find him.

Meanwhile, at 3 Stooges Junkyard, Larry and Curly are moving some junk, and Moe ends up in the junk with a can on his head. They are then called by Agent 000 via the can on Moe's head. The projection is on Larry's face, starting on his forehead, then his nose, then his tongue, and then Larry closes his mouth, presumably swallowing the projection.

The Robonic Stooges try to defend the Second National Bank, but are sacred by the dinosaur, and Ug robs it. The Stooges end up the dino's mouth with the money, and they find themselves in prehistoric times with all the money, and Ug is counting his stolen money. In another failed attempt at their heroism, they end up falling off a cliff and end up hanging from a branch.

Then, The Stooges use Curly as a vacuum, and he sucks up Ug, the time machine and the money. They then travel to the present day, but at first don't realize that they are. It's later found out that they were on a set for a dinosaur movie being made by Gigantic Studios. They then get kicked out and the episode ends with Moe and Larry trying to transport Curly, who is very heavy due to all the stuff he vacuumed.

Retrieved from "https://stooges.fandom.com/wiki/Dimwits_and_Dinosaurs?oldid=9937"
Community content is available under CC-BY-SA unless otherwise noted.